Palestinians call for release of Italian activist kidnapped in Gaza

Today, our friend and colleague, Vittorio Arrigoni, a journalist and human rights defender working in the Gaza Strip, was kidnapped by Salafists, members of a very small extremist group in Gaza.
Περισσότερα...
14 04.2011

We Will Not Be Intimidated 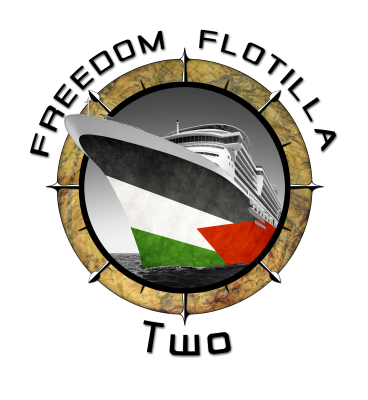 
Athens – The Freedom Flotilla 2 Steering Committee met in Athens 9 and 10 April to continue preparations for the upcoming flotilla. Since the last meeting in Amsterdam, Israel has launched an international campaign of incitement against the Flotilla and its coalition members who are participating from around the world.

The Greek Ship to Gaza hosted this international meeting and emphasized that the Greek government has failed until now to pressure Israel to release the two Greek boats hijacked from international waters and held in Israel since 31st May 2010. The Greek Ship to Gaza has complied with all of the roadblocks put into place by Israel in order to bring back its ships, but our efforts have been to no avail. The Greek government should have pressured Israel to release immediately the ships, as Israel did for the Turkish ships in August, 2010.

Press conference of representatives of the Freedom Flotilla II

The initiative ''Ship to Gaza" will participate in an international expedition that is sailing to Gaza at the end of May 2011, carrying people and humanitarian aid, expressing and materializing its solidarity with the people of Palestine. In the International Alliance of Freedom Flotilla II take part representatives of movements and initiatives: Algeria, USA, Canada, Scotland, Spain, France, Holland, Ireland, Italy, Sweden, Norway, Kuwait, Jordan, Malaysia, Indonesia, Switzerland, Turkey and organizations of the Palestinian Diaspora.
Περισσότερα...
27 03.2011

US Boat to Gaza responds to IDF spying on internationals

US Boat to Gaza

According to the Israeli newspaper Haaretz, the Israeli government is "launching a public campaign" today, March 22, 2011 aimed at stopping the planned International Freedom Flotilla set to sail this spring. This news comes on the heels of information that the Israeli Defense Force (IDF) announced it has formed a special unit to "monitor" foreign nationals opposed to its policies, including the flotilla.

The U.S. Boat to Gaza project has been organizing a boat called The Audacity of Hope that will be one of the approximately 15 boats that will sail to Gaza with people from over 22 countries. This non-violent, international flotilla will be sailing close to the one year anniversary of a flotilla that was brutally attacked by the IDF, killing nine people and injuring many more.

Organizers of The Audacity of Hope are outraged that the Israeli government is monitoring people in this country, as well as other nations, who are doing nothing illegal or threatening to that government.

"If the Israeli government is worried about so-called "delegitimization" they should put an end to their immoral siege against the people of Gaza. Instead of monitoring people in other countries, the Israeli government should be ending their illegal, counterproductive, and often violent policies towards Palestinians and internationals protesting peacefully," said Gail Miller, one of the organizers. "Israeli authorities seem intent on silencing dissent from within and without. If Israel believes that infiltrating, spying on, and perhaps once again attacking, un-armed human rights advocates in international waters or elsewhere is going to serve Israel's interest or lessen criticism of its unsustainable policies they are wrong."

Jane Hirschmann, another of The Audacity of Hope organizers, stated, "The U.S. Boat to Gaza and the international flotilla is committed to non-violently bringing attention to Israel's policy of siege, blockade, and occupation. We are not attacking or harming Israel, nor will we enter Israeli territory. Our plan is to sail peacefully to Gaza as part of a humanitarian mission consistent with U.S. and global values rooted in international law and human rights. If that is a crime in the eyes of Israeli officials then perhaps the U.S. government should re-assess the amount of diplomatic, military and financial support that U.S. taxpayers provide Israel with annually."

Organizers of the U.S. Boat to Gaza believe these new actions by Israel should be responded to quickly by the U.S. government and the international community. Our government cannot sit quietly by as the armed forces of another nation announce their plans to monitor U.S. citizens. Instead, the U.S. government must insist that such monitoring immediately end, and non-violent activities are not met with brutal or deadly force by the Israeli forces.

The Audacity of Hope plans on sailing in the late spring carrying U.S. citizens to the Gaza Strip as part of the International Freedom Flotilla. The goal of this journey is to create and strengthen ties with civil society and human rights groups in the coastal strip, which is home to 1.5 million Palestinians, most of whom are refugees. In addition, the flotilla hopes to shed light on the collective punishment the Israeli blockade and siege has imposed on the people of Gaza.

ELIEZER MAROM, commander of the Israeli Navy who ordered the murderous attack on the Freedom Flotilla is in Greece... Arrest him now!

According to publications, the Head of the Israeli Navy, Eliezer Marom, has been in Greece since Sunday, upon invitation from his Greek counterpart.

He is the person mainly responsible for the violent attack on the Freedom Flotilla; of the murders; the piracy; the wounding; torturing; kidnapping and of random detainment; of pirating of ships and theft of objects from those ships, etc. He is one of the Israelis against whom 33 passengers from the boats Free Mediterranean, Sfendoni and Mavi Marmara, as well as two shipping companies, have filed a CRIMINAL COMPLAINT through their Attorneys and commenced legal procedures before the Prosecutor of the Athens Court on 2nd July 2010, for all the offenses committed against them.