Regarding statements of government officials in the U.S. and Israel about diplomatic initiatives on impeding the “Freedom Flotilla II - Stay Human” mission to Gaza, Palestine


Regarding statements of government officials in the U.S. and Israel about diplomatic initiatives on impeding the “Freedom Flotilla II - Stay Human” mission to Gaza, Palestine.

Proper diplomacy does not exclude proper humanitarian action and it’s impossible to be aiming at preventing just action by an international community of active citizens; on the contrary, diplomacy must pursue such actions and encourage them.

It is a provocation that powerful states and International Organizations, such as the U.S., Israel, the U.N., are asking from society to be silent and not to react to violations of law and the disdain of universal values.

We are determined to sail to Gaza, and we will. Our cause is just and our means are transparent. International diplomacy must do what it has denied to do for years, to undertake initiatives that it has not undertaken for decades, and, of course, instead of threatening with violence those that had among them nine unarmed victims in international waters a year ago, it must warn with legal sanctions the perpetrators of such crimes.


The action of movements and civilian organizations that defend Freedom, Justice and the Human Rights, is not destined just to denounce humanitarian disasters, clashes, occupation and violent oppression of social movements.

But it must be present, direct, pro-active and transcending the political process of handling and resolving crises, which governments and international organizations carry out slowly, indecisively and, above all, with self-interesting ends.

This is the case with the grossly unjust and unlawful blockade of the Gaza Strip and the whole of Land of Palestine, in general.

The Freedom Flotilla II mission is a healthy reaction to the apathy of the international political community, and is moving to confront the humanitarian crisis with action, and to uphold the universal values in Gaza and Palestine. This mission, in its own way, arraigns all those who, for many years, watch passively the drama of Palestine, and, mainly, those who directly or indirectly concur to it.

The action of movements and civilian organizations that uphold Freedom, Justice and the Human Rights, such as the action of Freedom Flotilla II, not only builds a different level of conscience, but is, and has to be, an active conscience.

Below you may read the question as it is published in: http://www.europarl.europa.eu/

A new Middle East is arising!
But Palestine is still under occupation!
Gaza Strip is still under siege.
All the commercial border crossings are controlled by Israel.
No building materials or medical supplies can enter freely.
No exports can be made.
Will Israel end the siege of Gaza?
Gaza  we are coming! Freedom Flotilla II - Stay Human

Geneva --  On 16 May 2011 the Special Rapporteur on the situation of human rights in the occupied Palestinian territories, Mr. Richard Falk, marks the 63rd anniversary of the Nakba, the catastrophic beginning of the Palestinian tragedy of dispossession and occupation, with the following statement.
Περισσότερα...
15 04.2011


The murder of human rights activist, Vittorio Arrigoni, is a tragedy for his family, for those of us who knew him, and for the Palestinians who loved and admired him. The Steering Committee of Freedom Flotilla 2 condemns this senseless murder and the people who are behind it. They took the life of one of the most passionate supporters of justice for Palestine. This murder is damaging to the Palestinian struggle for freedom and justice as well as our work in support of that struggle.


In his honor, we are naming our next voyage, FREEDOM FLOTILLA – STAY HUMAN. 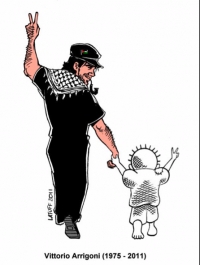 As word has come that Vittorio Arrigoni was murdered in Gaza, those of us who knew and loved him are heartsick.
Περισσότερα...
Σελίδα 7 από 10 EναρξηΠροηγουμενο12345678910ΕπομενοΤελος